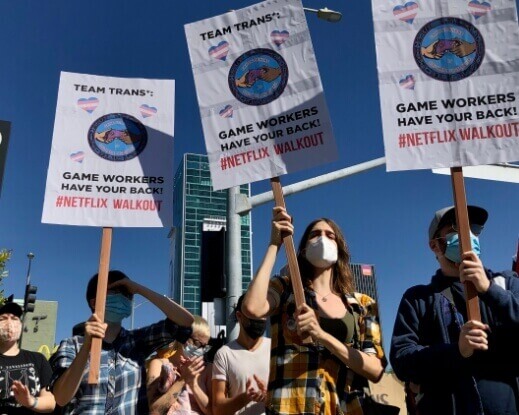 Have you seen Dave Chappel’s show recently on Netflix? This show has become the cause of creating controversy, damaged public feelings and grievances. Almost 100 people have protested in Netflix’s head office located in Los Angeles, accusing comedians and the streaming giant of playing insensitive and transphobic content. This offensive content disagreement can result in unfavorable outcomes. In the beginning, Netflix stood with Chappel to reply to those who complained about Dave Chappel’s show, but it changed its observation later. Netflix staff and transgender activists have asked Netflix to be more sensitive to avoid such hate speeches in the future. They have also demanded to hire transgender and non-binary talents by changing their policies and procedures. It is the latest movement by transgender activists and Netflix staff.

Gen-Xers and Baby Boomers have thought seriously to avoid political and social issues in its offices through such insensitive content. Netflix has now changed its mindset fully and decided not to go with such heartless content. Gen-Z and Millenials staff are looking to work separately from their seniors. Younger employees search for jobs and careers which offer values and enthusiasm. They love to work in companies that discuss their values and social vision. If companies are totally focused on business matters that hurt their employees’ trust and emotions, this association becomes a voice of objections after some time. According to a Blind (social media platform) survey between October 14 to October 19, almost 25% of Netflix employees have responded that they had currently participated in employees protests at their organization. Netflix’s staff have accepted that they had also participated in such types of protests during last year. A survey made by Blind also notified that the majority of respondents are not a supporter of protests.

The activism is rested upon minor people calling protests and other activities. Some other surveys tell different stories. Gartner’s survey has depicted that almost 25% of employees expect employers’ involvement to take social issues. Though social issues are not damaging employers’ interests, one-quarter of employees need their engagement in activism. Various companies’ surveys show that recent protests demand urgent involvement to receive their social equity and justice. Some recent surveys also show that almost 68% of employees are looking to quit their jobs. They love to work with such organizations which have positive stands on social justice. It also said job satisfaction for employees relies upon the employer’s interest in social and cultural issues. So, protestors can be employees, individuals, social workers, or politicians, but the right demand may benefit your country’s prosperity and unity. Suppose Online furniture retailer Wayfair had demanded to cancel the deal of $2,00,000 between a government contractor under US President Trump administration.

It happened because a government contractor was operating immigration detention centers on US and Mexico border. CEO Niraj Shah has rejected the appeal from employees to cancel the sales, and workers have called an unpredictable walkout to register their protests. Facebook and Google updated their policies and procedures to avoid clashes between highly sensitive political, racial, and COVID-19 pandemic topics on their message boards. Google had ordered its employees to work for what you have been hired for and avoid engagement in social, political, and economic discussions. Various companies have made policies to be away from social and political discussion at the workplace, but a few groups have not agreed upon this statement made by corporates. However, the same protests occurred against Dave Chappelle’s show by its staff and trans on Netflix.